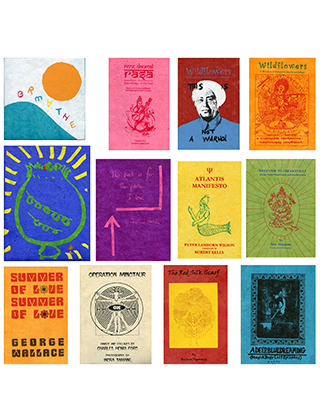 Granary Books is pleased to present a comprehensive collection of books, broadsides, and ephemera by Shivastan, a small press that operates out of Woodstock, NY, and produces small editions in Kathmandu, Nepal.

Mirabito’s connection to this community is deep; he grew up in upstate New York, where as a teenager he began visiting Allen Ginsberg’s farm at Cherry Valley. Absorbing Hindu and Buddhist philosophy from Ginsberg’s library, Mirabito first traveled to India in 1988 and has continued to travel near-annually since. A longtime resident of Woodstock, he also runs a bookstore by the same name, which hosts readings and events related to the press.

Shivastan books and broadsides are printed on handmade paper and often use hand-sewn bookmaking techniques. Many of the early books are handset as a result of printing traditions in Nepal; for instance, Welcome to Freaksville is printed letterpress. According to Mirabito, the paper is sourced from co-operative villages high in the Himalayas and made by local women; the nature of production often means that dirt, feathers, hair, bits of leaves will find its way into the paper (Brooklyn Rail). Furthermore, Mirabito works with local printers to develop techniques well-suited to handmade paper, such as rolling it before printing, or ensuring that silkscreening occurs before monsoon season so that it cures properly. Editions are often small, ranging from 33 to 444 copies, and in what Mirabito calls “mystical numbers” with Hindu or Buddhist significance.

The collection contains approx. 50 books, 11 broadsides, and approx. 34 items of publishing ephemera. It constitutes a near complete run of the press thus far.

The collection has sold.